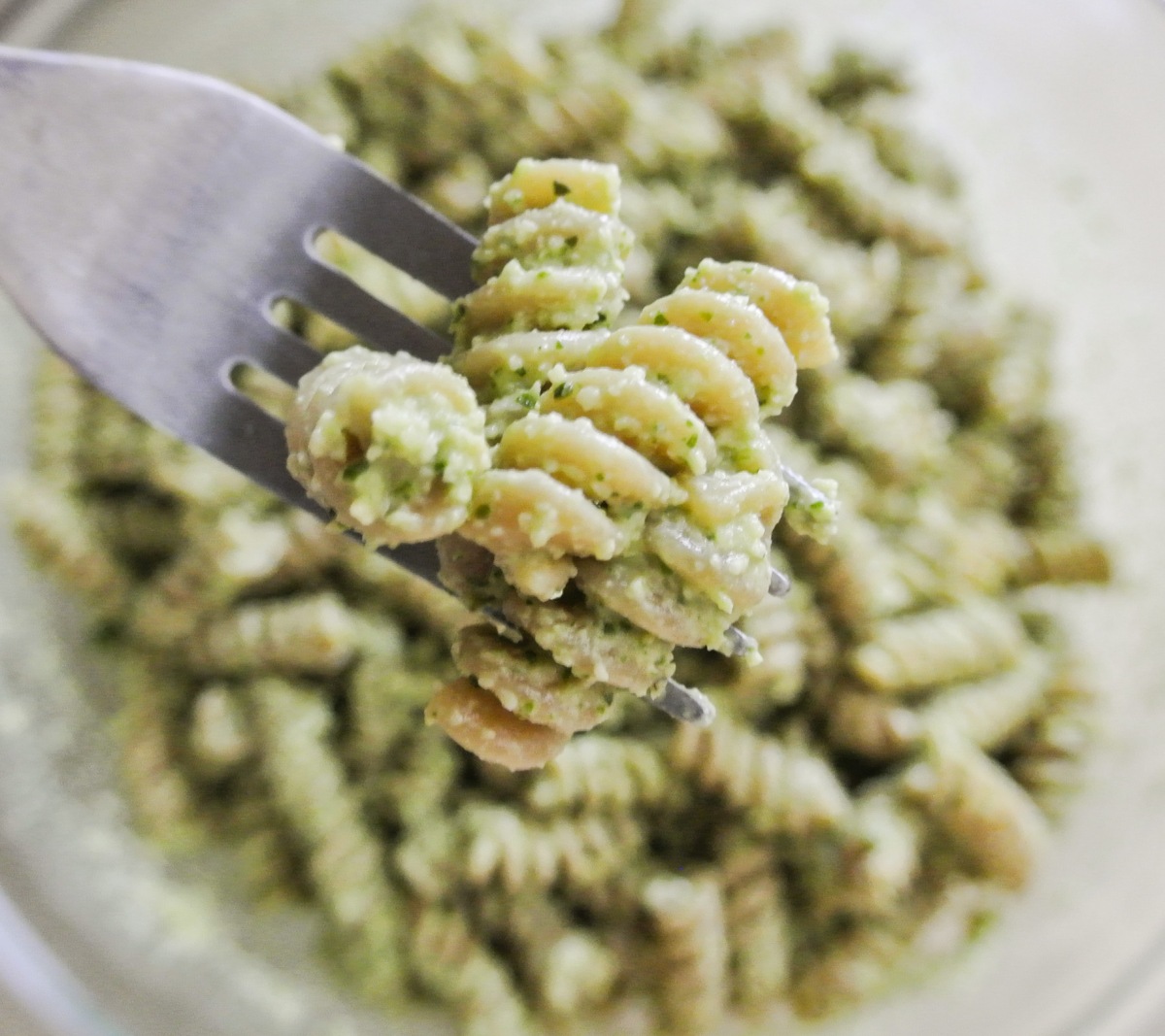 We can all eat more greens, but naturally, we often don’t want to.  Sometimes, as refreshing as it is, a big ‘ole salad just doesn’t fill us up the same as a bowl of mashed potatoes.  And smoothies are delicious, too, but what if I want something warm?  I could wilt my greens, but then, I’d have a plate of wilted greens (sorry ya’ll—that texture just doesn’t do it for me!).  How am I going to get my greens when I’m in the mood for comfort food?

Pasta to the rescue!  Growing up in an Italian family, pasta was a staple, and to this day, it is the comfort food I seek more than any other.  Pasta is also easy to prepare and extremely versatile.  Sometimes I toss it with my simple marinara, and other times, my creamy vegetable sauce.  You could even use my nacho cheese sauce to create your own mac.  Today, I’m revamping my pesto formula.

Fresh herbs make for one insanely flavorful pesto, but I’ve found that just about any raw greens will yield a bright and complex pasta sauce.  Thus, I’ve readapted my pesto formula to include the option of greens other than herbs.

Today’s rendition uses kale, which Nolan used to eat raw in a salad like a champ but wouldn’t even consider touching now if it isn’t blended up in a smoothie.  🙂  While smoothies remain my go-to for ensuring my toddler gets all of his nutrients on his pickier days, I’ve gotten creative with hiding vegetables.  Of course, hiding veggies in a bacon cheddar cheese omelet makes that effort moot, so I’ve had to work hard to make this game of hide-and-don’t-seek healthy.

If you need a change from hiding veggies in my super food muffins or smoothies, try out this new take on pesto.  Enjoy!

Combine all ingredients in a food processor and blend until smooth, adding water and/or oil as needed. The less oil used, the lower in fat the end product will be.  So flavorful, this pesto doesn’t even need salt! 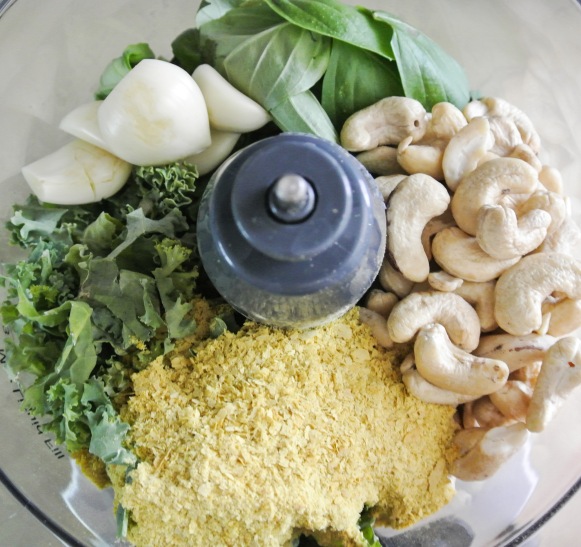 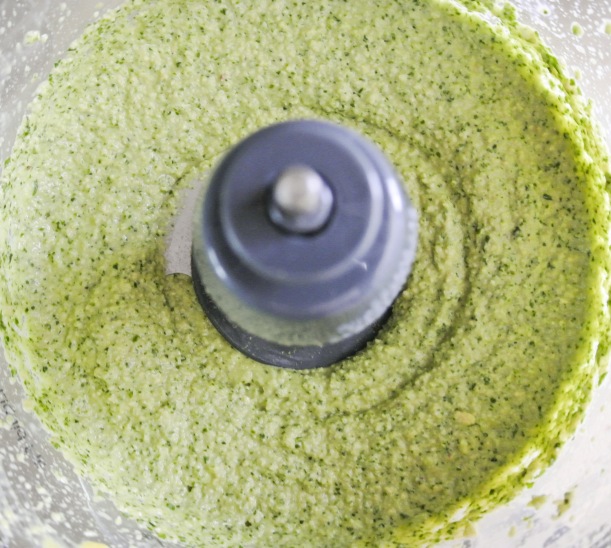 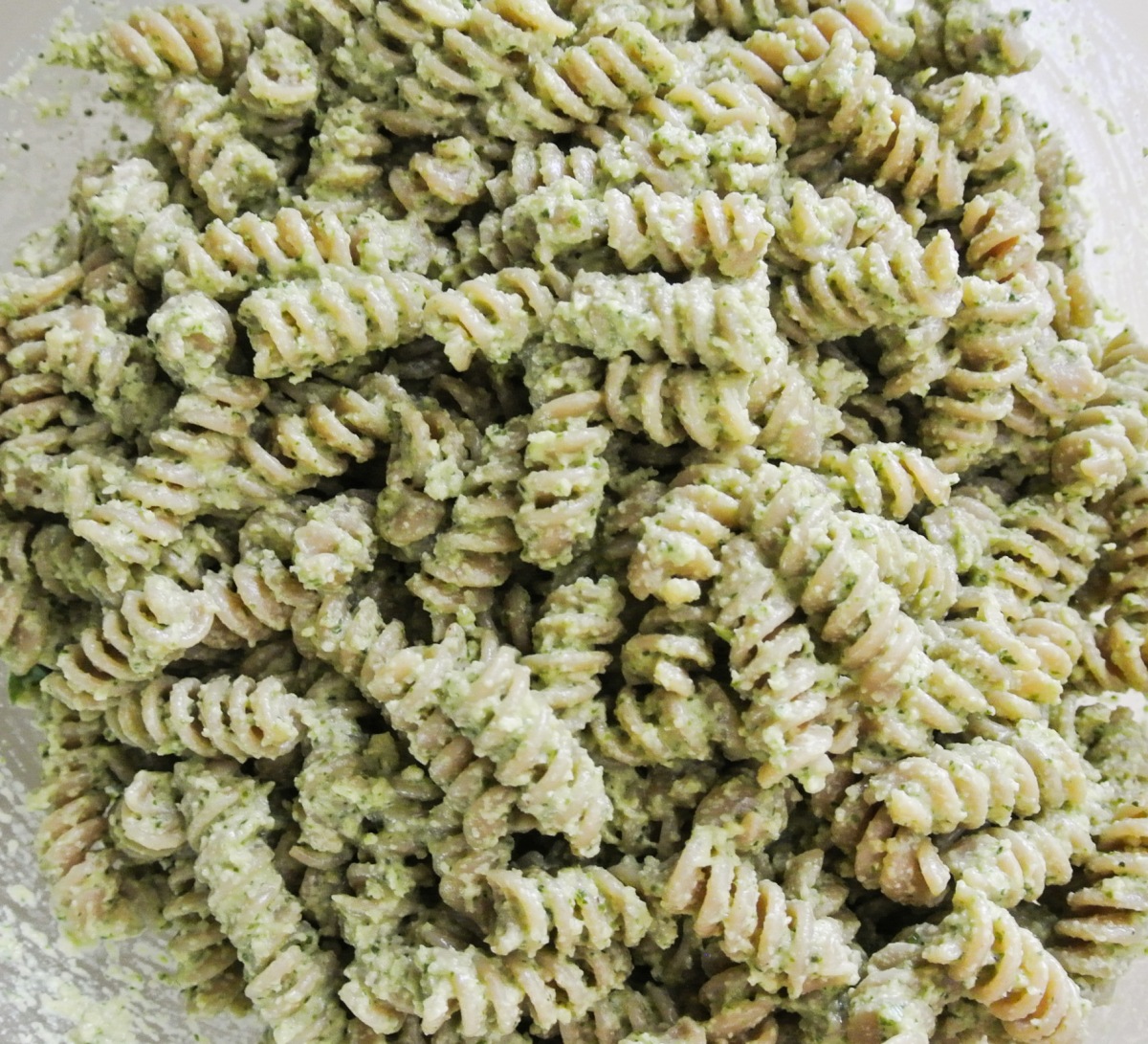 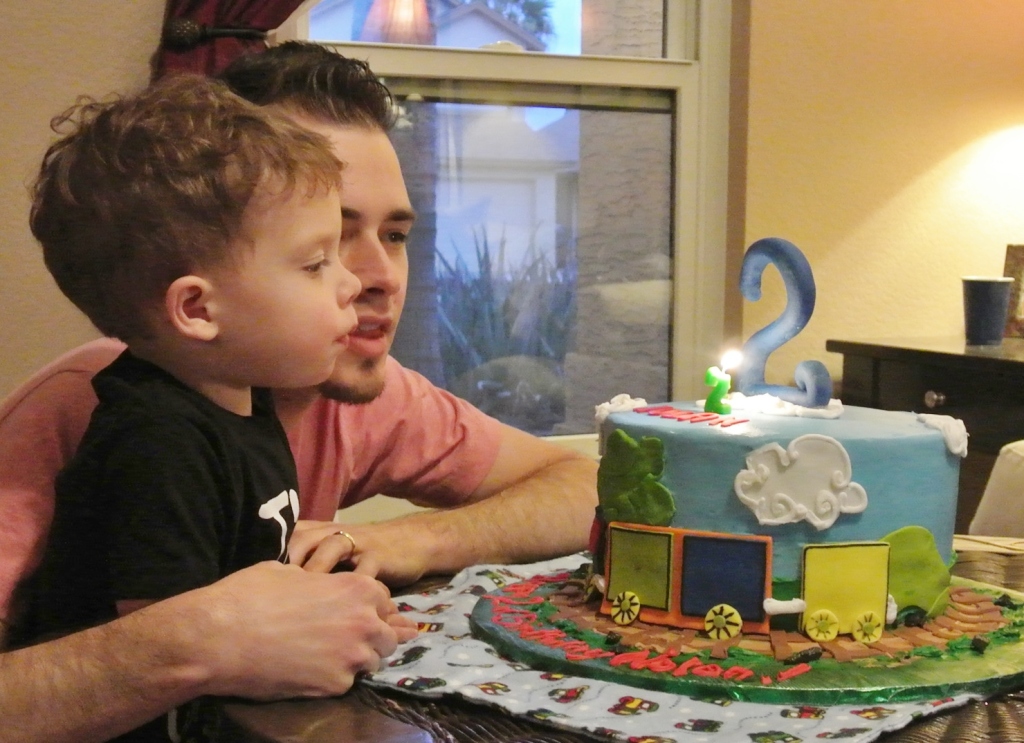 I can’t believe my son is already two years old! Everyone told me that the time would fly and they were right. Before I knew it, it was time to plan Nolan’s second birthday party, including a mostly vegan menu that was sure to please all guests.

And, it did! We kept the affair small and invited family members that are both vegetarians and omnivores. Everyone ate mostly vegan and loved it, exclaiming over the food and asking me for recipes. In the past, I’ve served foods at parties I’ve thrown that are crowd pleasers, but that don’t necessarily reflect our plant-based lifestyle. Animal products like meat and cheese were once on the menu for such an event and I would always be conflicted with the leftovers; I don’t believe in wasting food, but I don’t, any longer, choose to eat many animal products. This time, I knew that I wanted to be left with the food that we eat every single day. 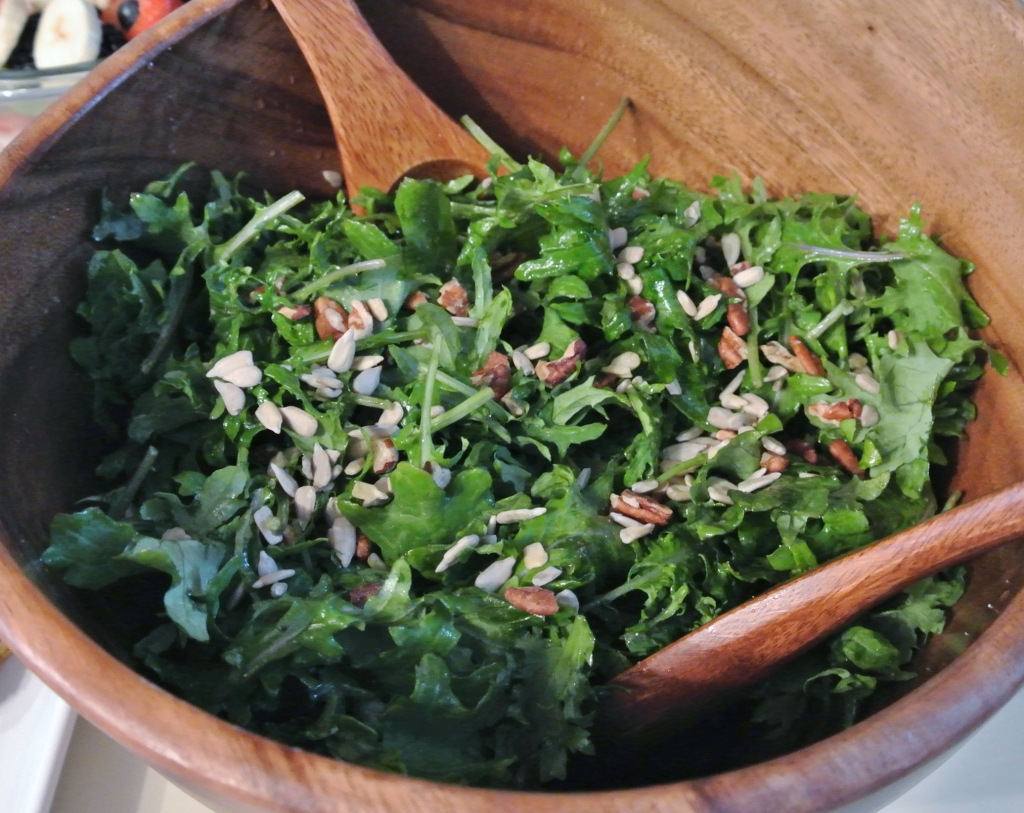 To answer the question that is surely on many minds, particularly those of parents, yes, Nolan follows a plant-based lifestyle, too. While I’m no expert on this way of eating and living, I’ve done quite a bit of research and have been living plant-based for over three years. As a result, I know that animal products are not at all necessary to the proper growth and development of a young child. While Nolan eats the occasional piece of cheese or cup of yogurt when at the homes of friends and family, in our house, he eats just like Travis and I do.

So, when it came time to plan his birthday party menu, I knew I wanted to serve some of his favorites. I apologize for the less-than-stellar quality of these pictures, but with a house full of hungry guests, a toddler being a toddler, and dogs running all over the place, capturing these images ended up becoming sort of an afterthought. 🙂 Here’s what we served: 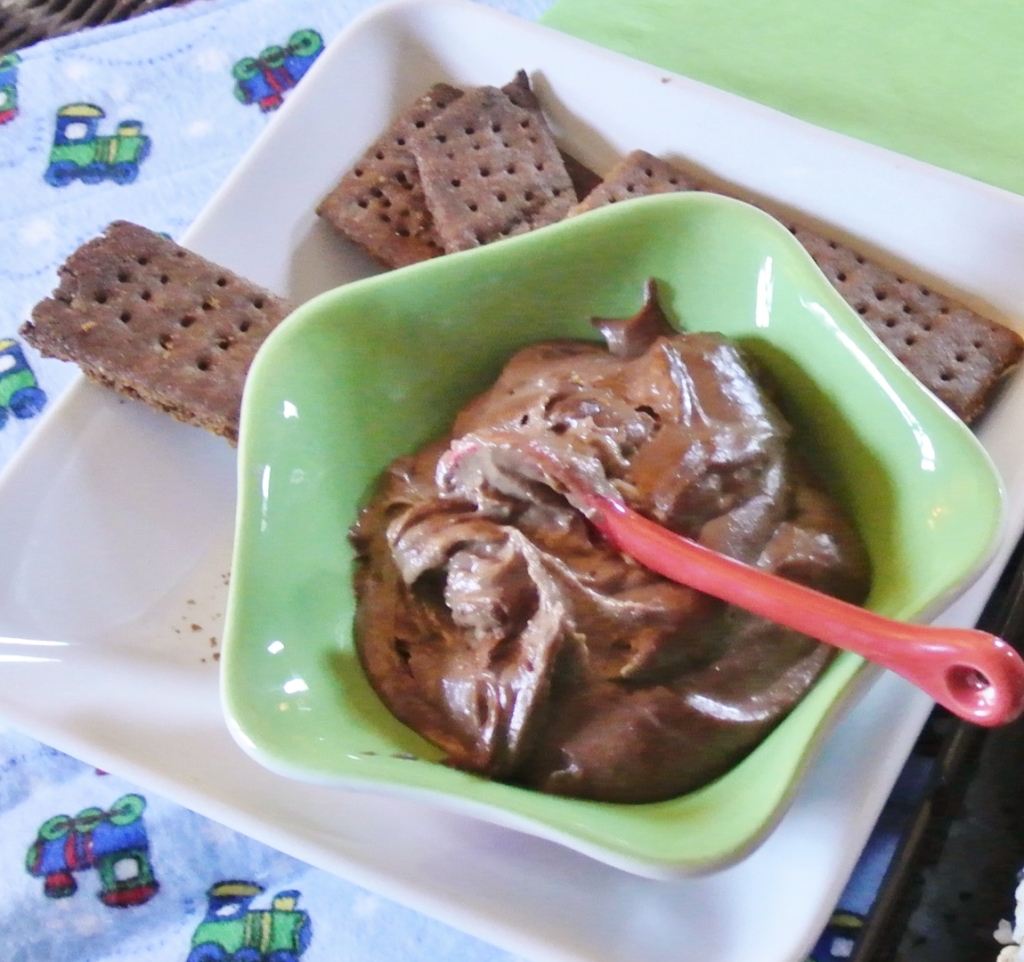 To answer another question that may be on your mind, yes, Nolan does eat (and love) all of these foods, often in one day. The kid DOMINATES plant-based yumminess like it’s going out of style and I’d be willing to bet that if we did a blood draw, the results would show that he’s in better nutritional shape than most adults. He has no food allergies, has energy for days, is happy and well-tempered, and has been sleeping through the night for at least twelve hours since two months old. I’d say that he’s doing just fine without animal products.  🙂

As you read in my bio, I am a mostly vegan, as sometimes it just isn’t feasible to be 100% plant-based. Case in point, Nolan’s cake. I have made vegan and gluten-free cakes and icings before, to much success. This time around, however, I needed someone to do the job for me. With Travis working full-time and completing an MBA, a steady stream of visitors since January (everyone wants to be in Arizona when it’s winter!), my job, and running our entire house, I honestly just didn’t have the time, this time. The cake was delicious and it was worth the very occasional splurge. 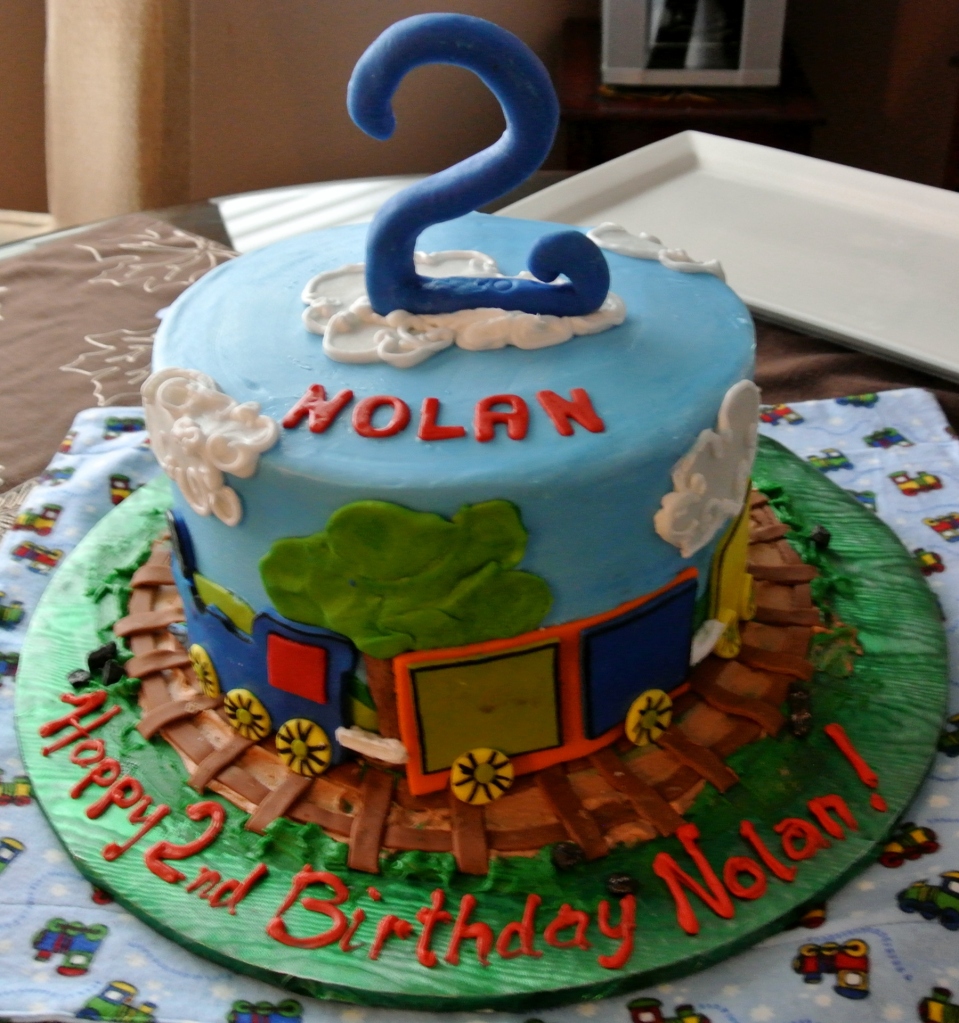 I’m hoping that getting a glimpse into our plant-based lifestyle—even when throwing a party—helps you to embrace it yourself, even if it’s occasional or gradual. I can’t stress enough the health and happiness that living this way has brought to our lives and we have an adorable two-year-old to show for it. Happy Birthday, Nolan!

When contemplating what to post about this week, the decision was made for me when my husband, Travis, came home with a new Vitamix. If you read my post on dessert smoothies, you know that I’ve wanted one of these highly coveted, seemingly superhuman kitchen appliances for some time now. While my Ninja is a high performing blender, it fails to completely purée seeds and tougher fruits and veggies like blueberries and kale. Ready to make the switch, I knew that I needed to try making my super food smoothie before anything else to really put my Vitamix to the test.

First, a word about some of the ingredients. Below, I’ve pictured ginger root, hulled hemp seeds, and turmeric powder. I first learned about the wonders of ginger when I was pregnant. This refreshing and crisp root aids with nausea and digestion. Turmeric is another amazing root, but not having any on hand today, you can see that I’m using powdered turmeric instead. Turmeric is an anti-inflammatory and is great for your skin. (I use a handmade facial soap loaded with turmeric.) When it comes to including roots in your smoothies—fresh or ground—start small. Their flavors are assertive and it’s better to err on the side of caution and add more later. 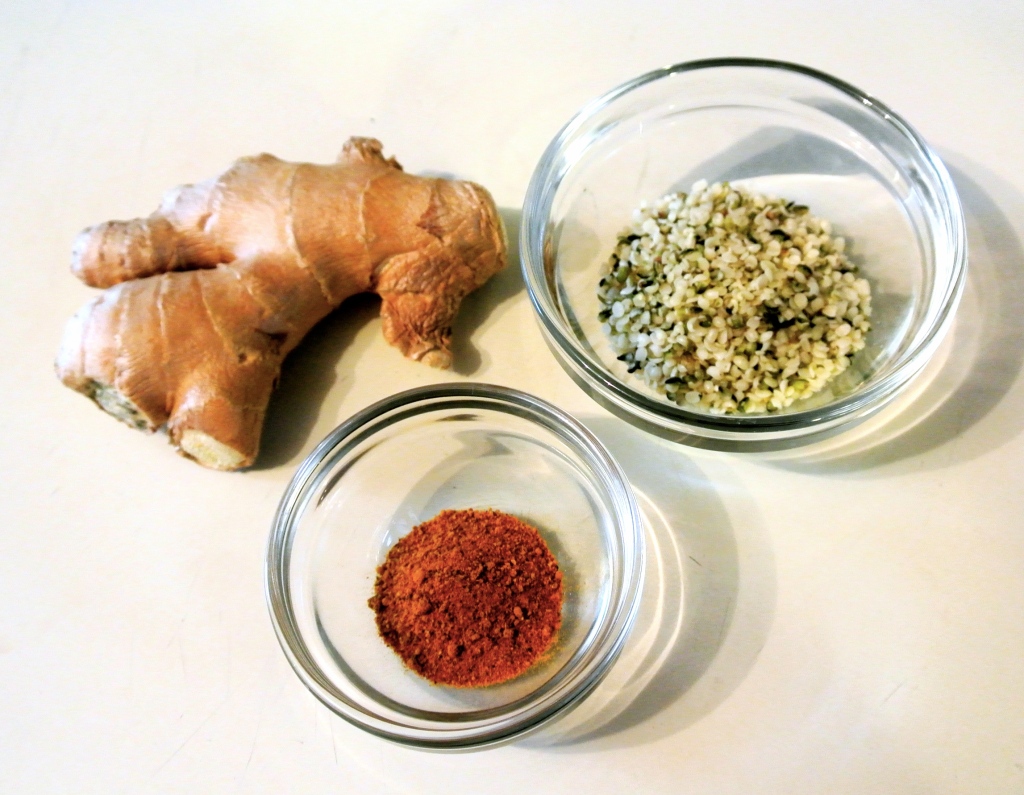 As mentioned in my bio, I am not a culinary or dietary professional, so I am always learning about food. My sister works for a vitamin company and serves as one of my primary sources, but I do other research, too. Thus, I’ve amended my super food smoothie formula to include hemp seeds. I’ve heard the buzzing about these seeds for some time now, but they aren’t as easy to find as seeds like chia and flax. After visiting Bob’s Red Mill in Portland (you have to go!), I finally got my hands on a bag of them.   Hemp seeds are one of the highest in protein of all seeds and nuts, and are packed with Omega-3 and Omega-6 fatty acids.

This smoothie is another breakfast (or lunch/dinner/snack) you can feel good about, and is easy to share with little ones, too. My son, Nolan, drinks one every day. Enjoy!

*Most of the time, try to avoid using juice as it is lacking the fiber from the pulp, flesh, and skin necessary to assist the body in properly processing the sugars therein.  The occasional freshly squeezed juice, pack with as much pulp as possible, is fine.  Other options include unsweetened plant milk, water, or a moisture-packed fruit such as watermelon.  Depending on the quality of your blender and the types of produce you are including in your smoothie, you may not need to add liquid to the mix at all.

Place all items in a blender and blend until smooth. Consume immediately as some seeds, even when puréed, will continue to thicken the smoothie the longer that they sit in moisture. 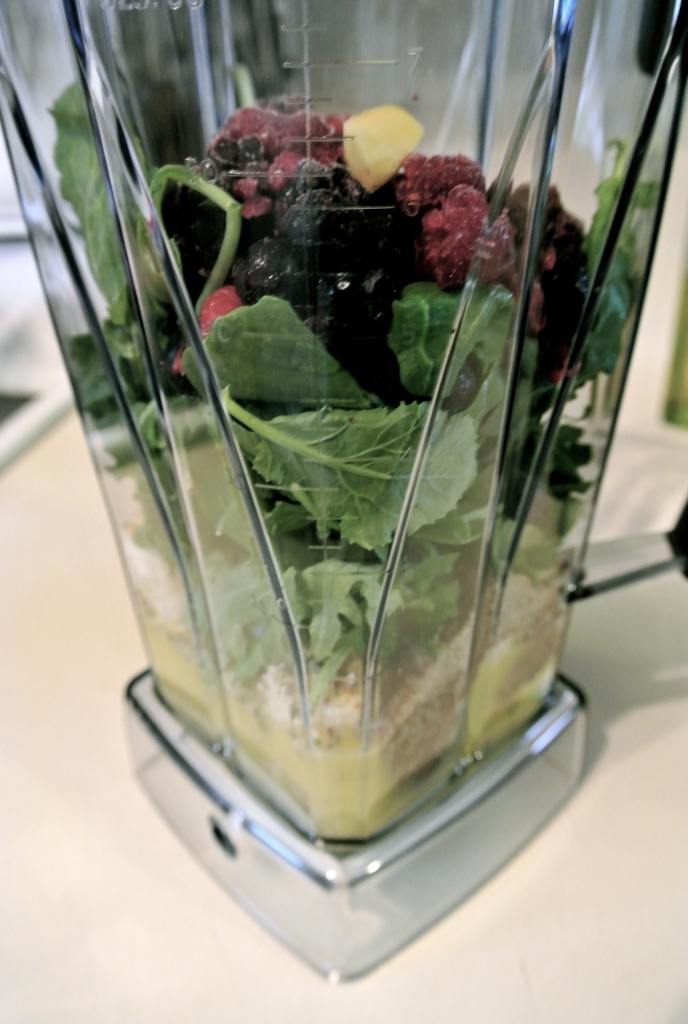 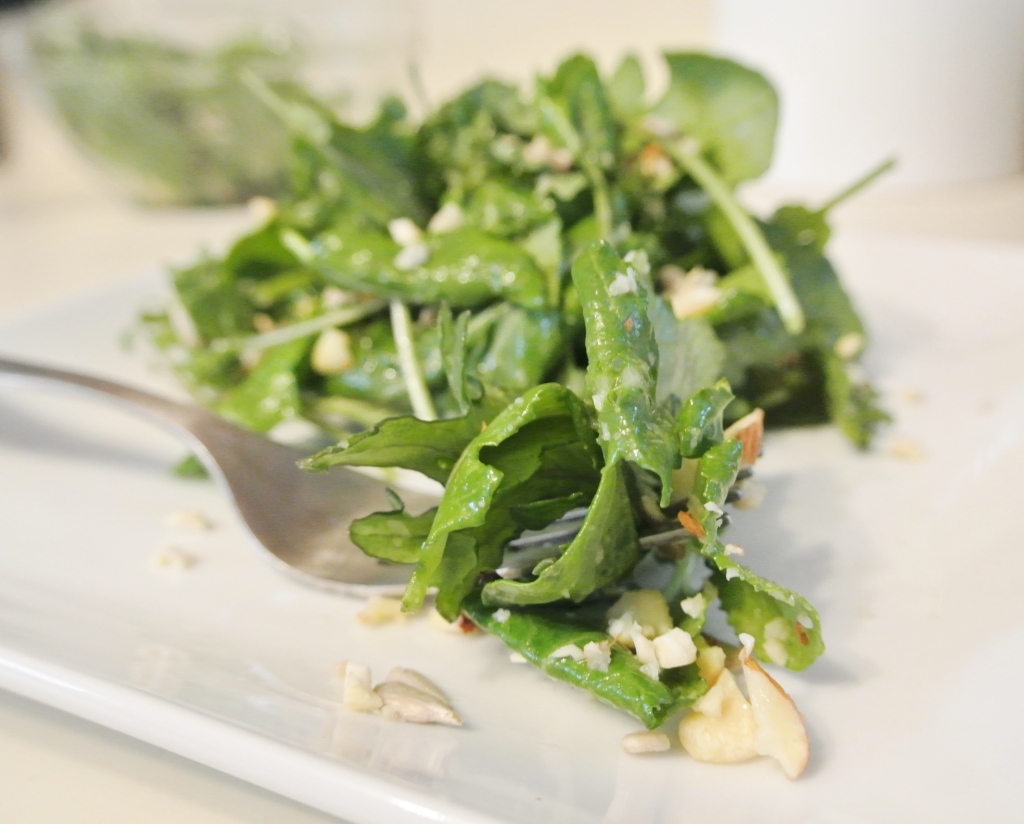 On a recent trip to Portland, Oregon to visit friends, I was surrounded by restaurants boasting the plant-based cuisine I love to eat. My friend, Danielle, told my husband, Travis, and I that kale was literally everywhere, including sitting on the pavement outside of her car one night! She said that nearly every restaurant offered a kale salad of some kind and that got me thinking about a kale salad recipe that I really enjoyed back in Arizona.

Another friend, Lissa, introduced me to a yummy kale salad recipe that she obtained from a colleague. The salad was simple, with the only vegetable being the kale itself. It was dressed in a mix of lemon juice and olive oil and topped with finely grated parmesan cheese. This recipe inspired my Green Salad Formula, which is a healthier, plant-based version of the greens.

When I make a green salad, I like for the only vegetable to be greens so that I’m consuming a large quantity of them. Kale, in particular, is high in fiber, iron, and calcium and packed with antioxidants. A true super food! This mix boasts a variety of organic baby kale leaves that are more palatable in a salad than their adult counterparts. 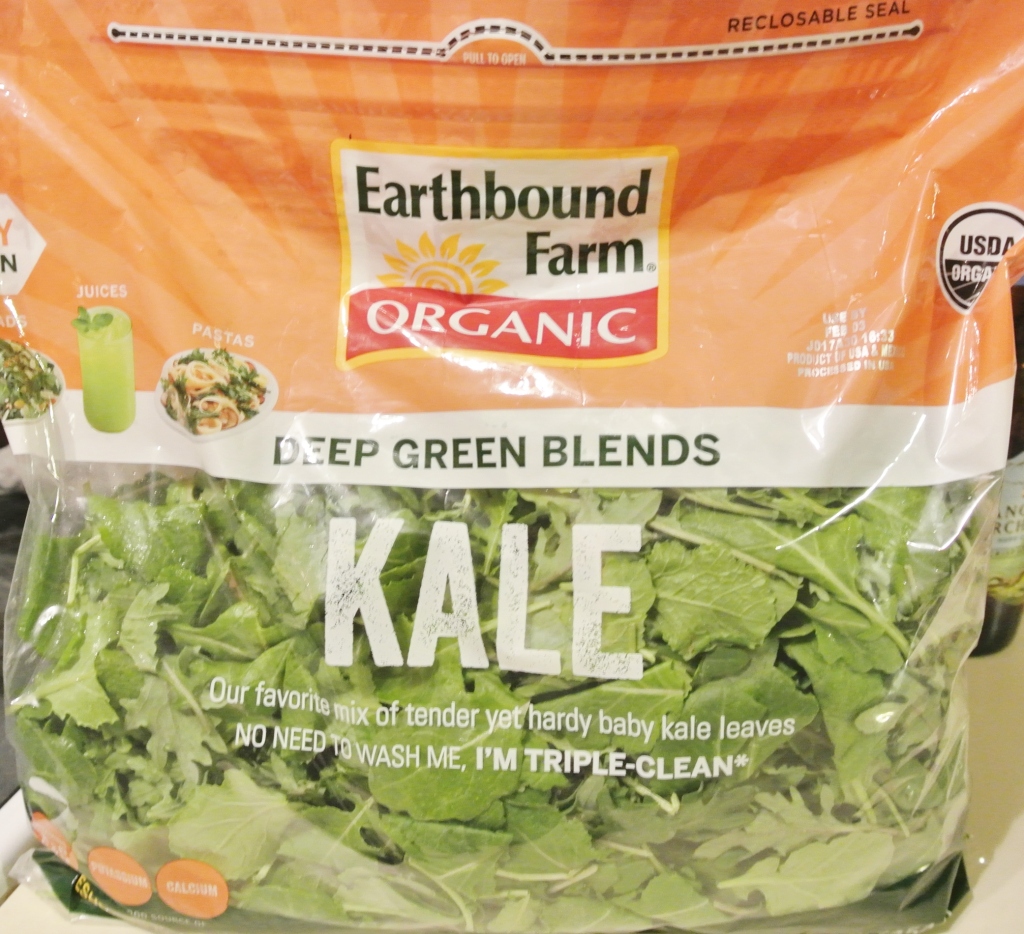 I add a little protein and crunch to my kale salad with the addition of raw sunflower seeds, almonds, and cashews. Cashews mimic the flavor of parmesan cheese, so I use them as a cholesterol-free substitute. 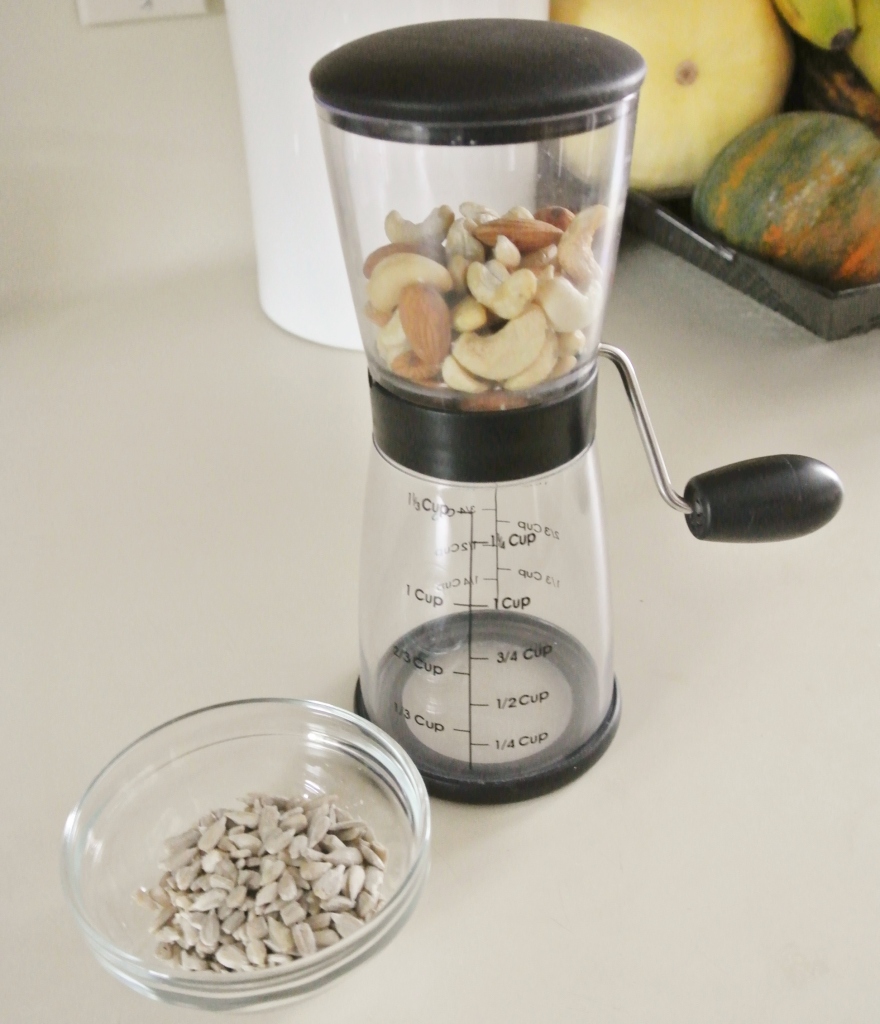 Finally, I make a lemon vinaigrette dressing for this salad that is fat free. The aforementioned kale with parmesan salad includes a dressing that is largely oil and in my opinion, too fattening when paired with cheese, or in this case, nuts. I add a hint of agave syrup to balance the tartness of the lemon juice and no oil whatsoever. Enjoy!

Mix the salad dressing with a small whisk and set aside.

Put the nuts through a nut grinder or chopper, or finely chop by hand. 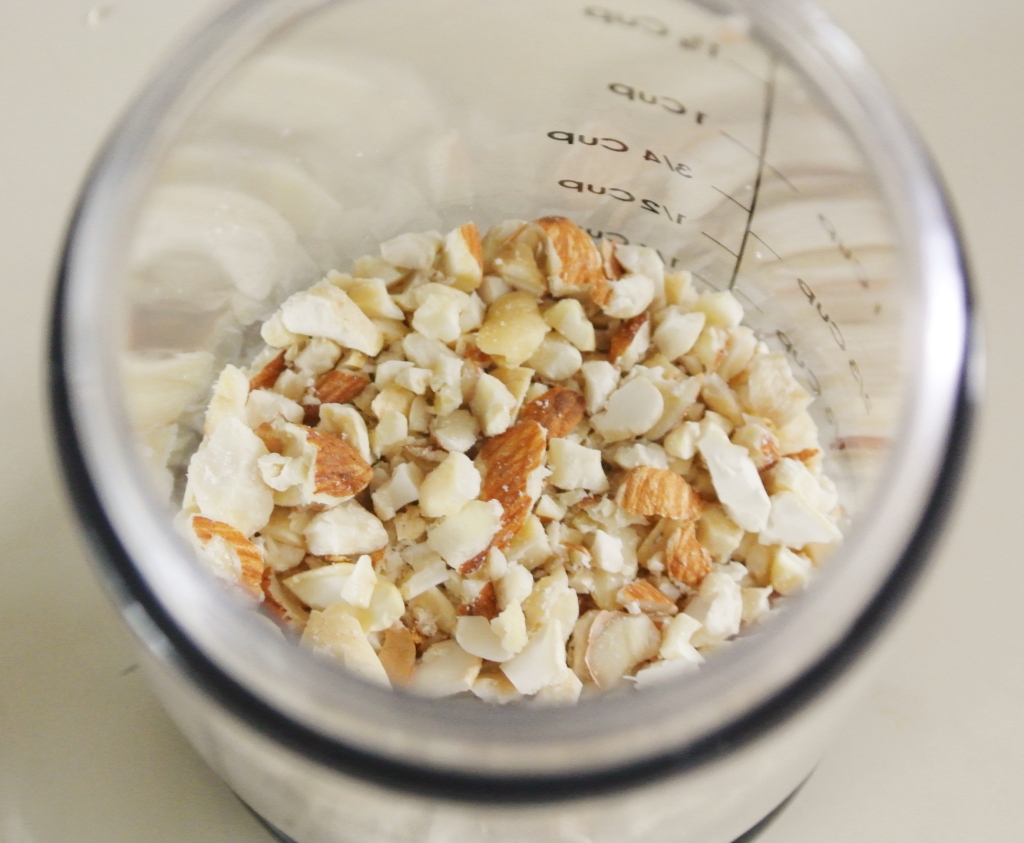 Toss the kale in the lemon vinaigrette and top with the sunflower seeds and chopped nuts. 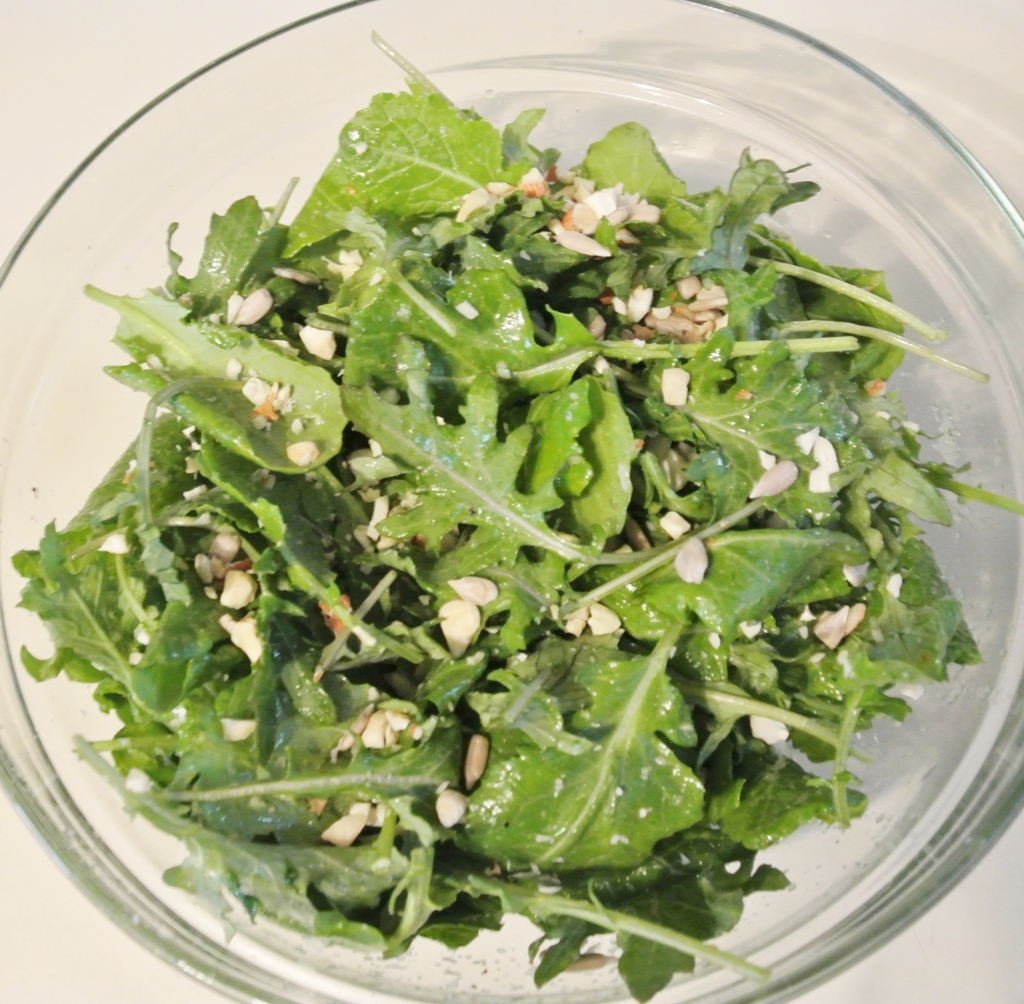